1.Detection of different types of base modification sites

Genomic regions with significant differences in methylation modification levels reflect the differences in regulation between samples to a certain extent. These regions can be structurally annotated using the genome location and the genome structure annotation information of these differential sites. 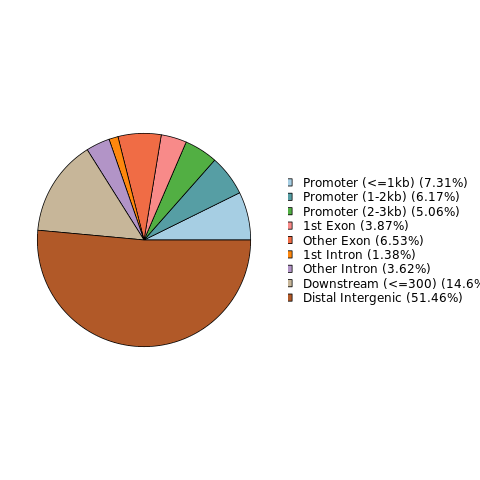 Notes on the structure of differential loci

Gene Ontology (referred to as GO) is an internationally standardized gene function classification system that can comprehensively describe the attributes of genes and gene products in organisms. GO enrichment analysis of genes with differentially methylated regions provides valuable information about biological functions, cell composition, and biological processes of methylation-regulated genes. 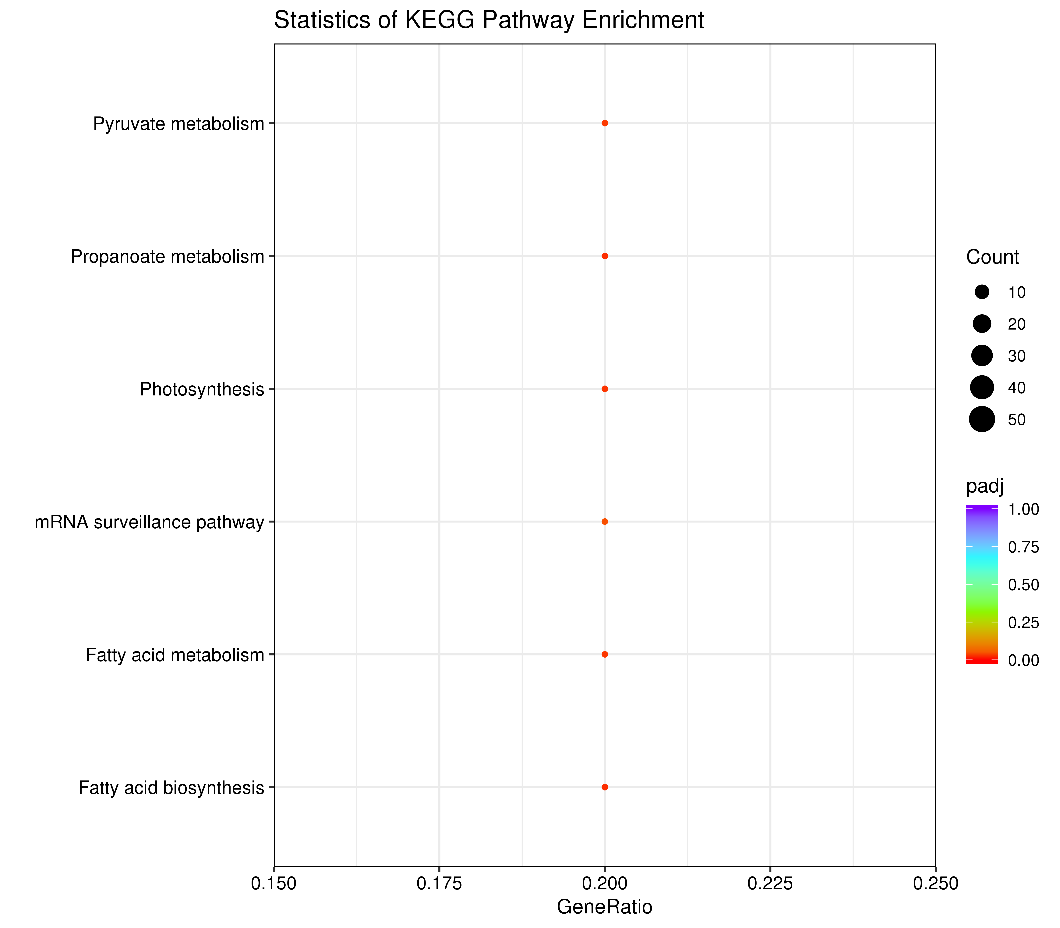 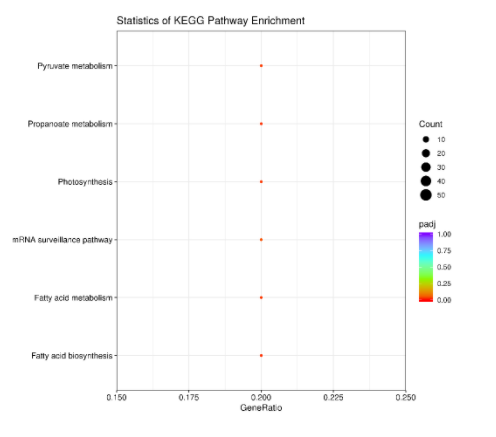 This is the first domestic study on 6mA modification of eukaryotes based on PacBio single-molecule sequencing technology, revealing the occurrence of 6mA modification in Arabidopsis thaliana and providing a basis for studying the distribution pattern and potential functions of base modifications in terrestrial plants. The Wuhan Futuromics provides PacBio sequencing services and has rich experience in such third-generation sequencing projects. DNA methylation is an important part of epigenetic regulation, and it plays an important role in regulating genomic imprinting, X chromosome inactivation, transposon silencing, gene expression, epigenetic memory, embryonic development, and tumorigenesis.

The researchers first used the Dot blot method to detect the 6mA modification levels in different tissues and different developmental stages of Arabidopsis, and then selected D9 and D21 samples for three-generation PacBio SMRT whole-genome sequencing. They compared the distribution models and dynamic changes of Arabidopsis 6mA modifications in the two periods, and combined transcriptome information to further study the potential functions of 6mA.

The researchers first used the Dot blot method to detect the level of 6mA modification in different tissues and different developmental stages of Arabidopsis, and found that 6mA was widely present in these samples to varying degrees. The level of 6mA gradually increased as ontogeny progressed, and rose sharply on D21.

Taking the D9 sample as an example, the PacBio SMRT sequencing depth is 103×, higher than the PB official recommendation of 100× for  measurement of whole genome methylation. Using the interval time between two pulsed fluorescent signals during sequencing as a marker, the degree of methylation of the site was evaluated, allowing researchers to obtain chain-specific D9 whole genome 6mA information. The experimental results showed that among all 29,811 adenines in the mitochondria, chloroplasts, and nuclear genomes, the rate of 6mA base modification was 0.04%, which was consistent with the 0.048% evaluated in the LC-MS/MS experiment. Areas closer to the centromere showed a higher 6mA abundance and a slightly lower average methylation level. 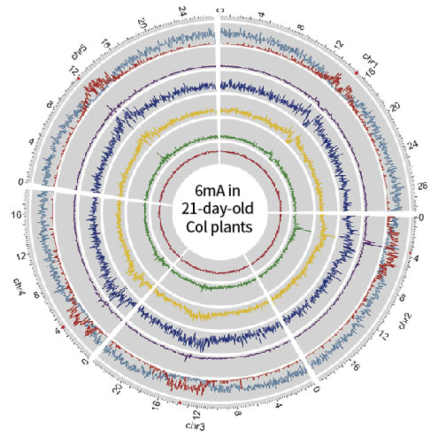 By evaluating 6mA in different regions of the genome (Exon, Intron, 5’UTR, 3’UTR, Fig.5A) and different types of genes (Protein coding, miRNA, snoRNA, etc., Figure B, C below) According to the 6mA distribution model, 6mA is more abundant in the gene body region than the intergenic region. 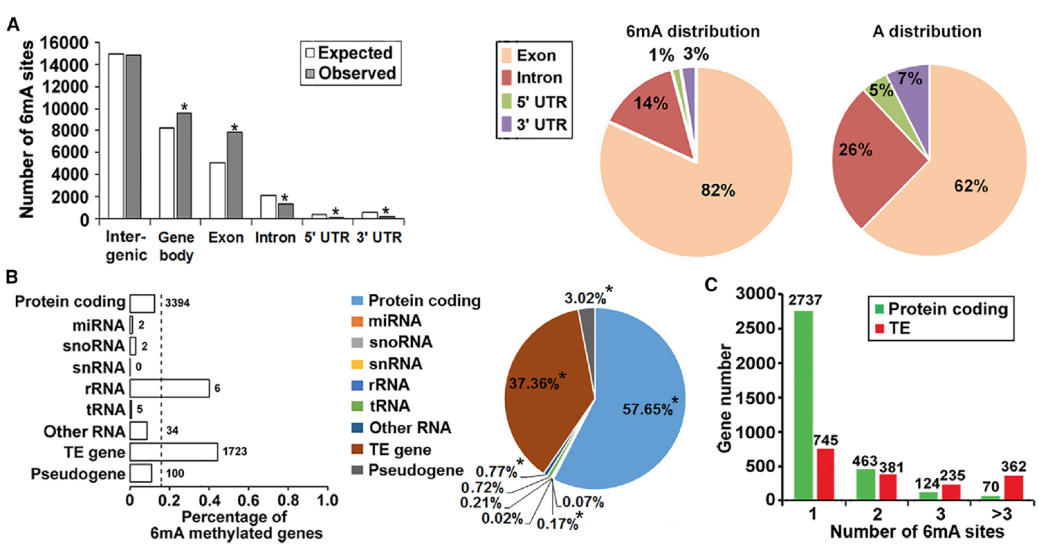 From a comparison between the D9 and D21 Arabidopsis whole genome 6mA distribution map, overlap relationship, and difference in distribution mode, we can know that during the development of Arabidopsis, the 6mA modification changes dynamically, and there are obvious differences in location and degree.

By combining the 6mA modification site and degree with the gene expression information from RNA-seq, the results show that 6mA is associated with genes that are actively expressed in Arabidopsis. There are more 6mA modification sites in the upper and lower 2.5kb region of TSS of highly expressed genes. The expression level of 6mA modified genes is significantly higher than that of unmodified genes, and the difference is more obvious when they are close to TSS. 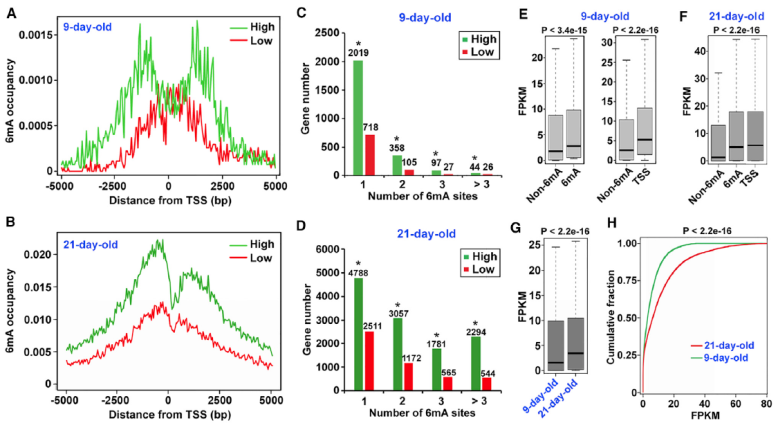