Most traditional sequencing methods require fragmentation, and it is still difficult to accurately assemble a complete transcript, especially when a read length can be compared to multiple sites (such as highly conserved sequence segments). The long read length advantage of ONT sequencing allows the easy sequencing of the full-length transcript sequence from the 5′ end to the poly(A) tail, significantly reducing the multi-site comparison of reads and increasing the specificity of the comparison between reads and reference genomes. 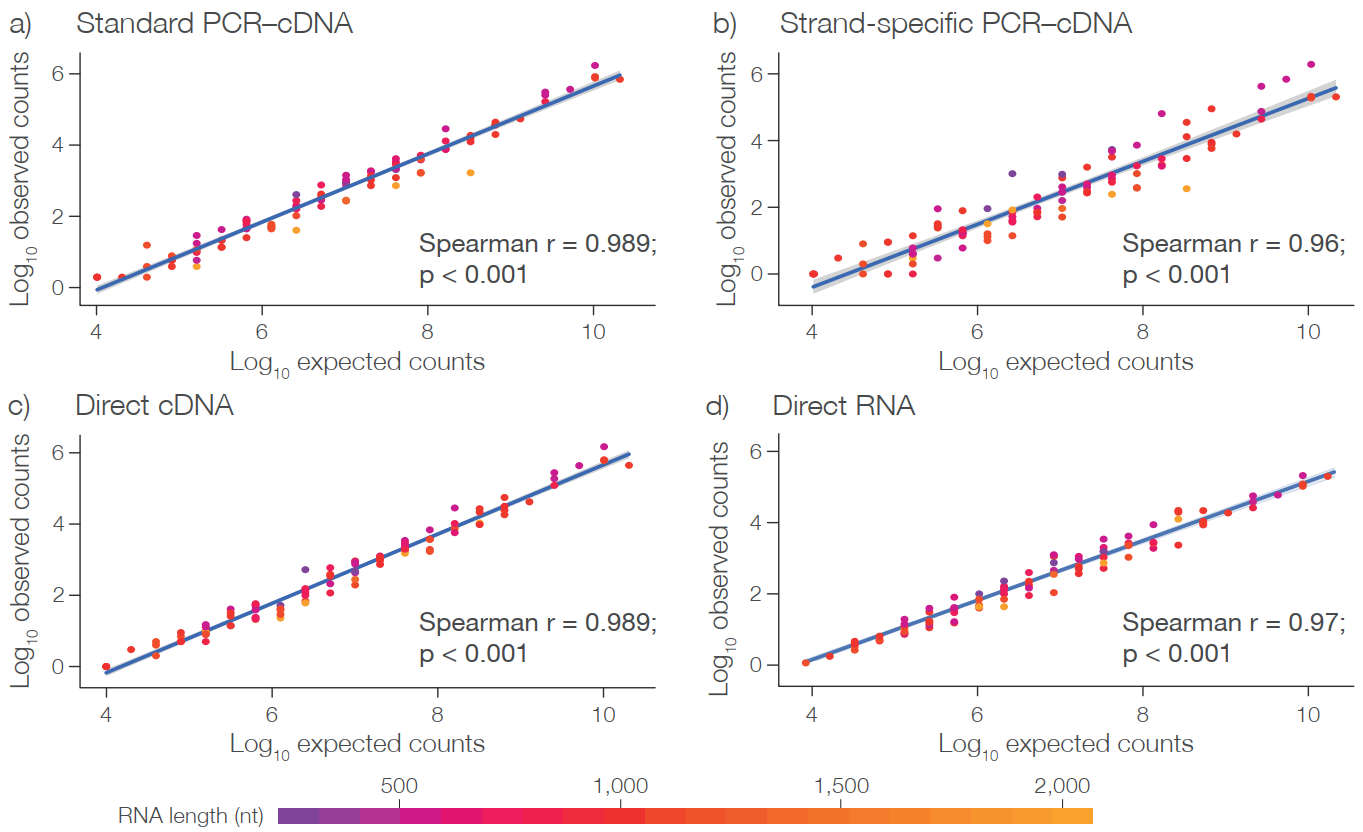 During the library building process, different primers will be added at both ends of the reads: one end is a 5’primer while the other end is a 3’primer, and there is also a polyA sequence before the 3’primer. If the transcript extracted in the experiment is a full-length transcript, then the complete insert sequence is the full-length transcript sequence. By judging the existence and positional relationship of the 5’primer, the 3’primer, and the polyA, the insert sequence is classified. Full-length reads are the full-length sequences obtained by sequencing.

Fusion genes are chimeric genes formed by fusion of all or part of the sequences of two genes. It may be formed by a chromosome translocation, an intermediate deletion or a chromosome inversion. 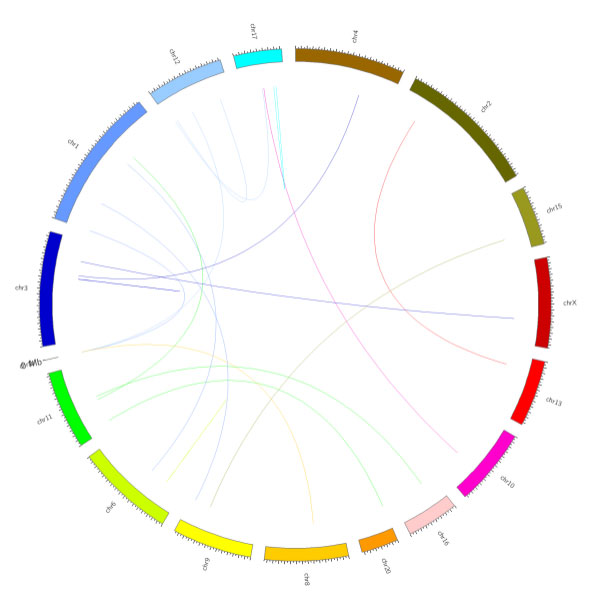 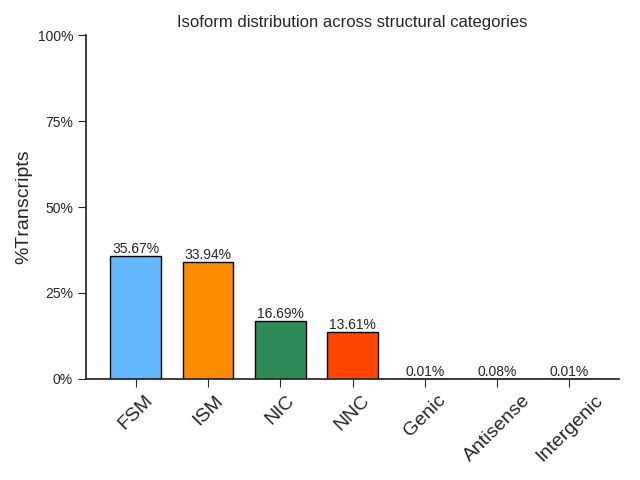 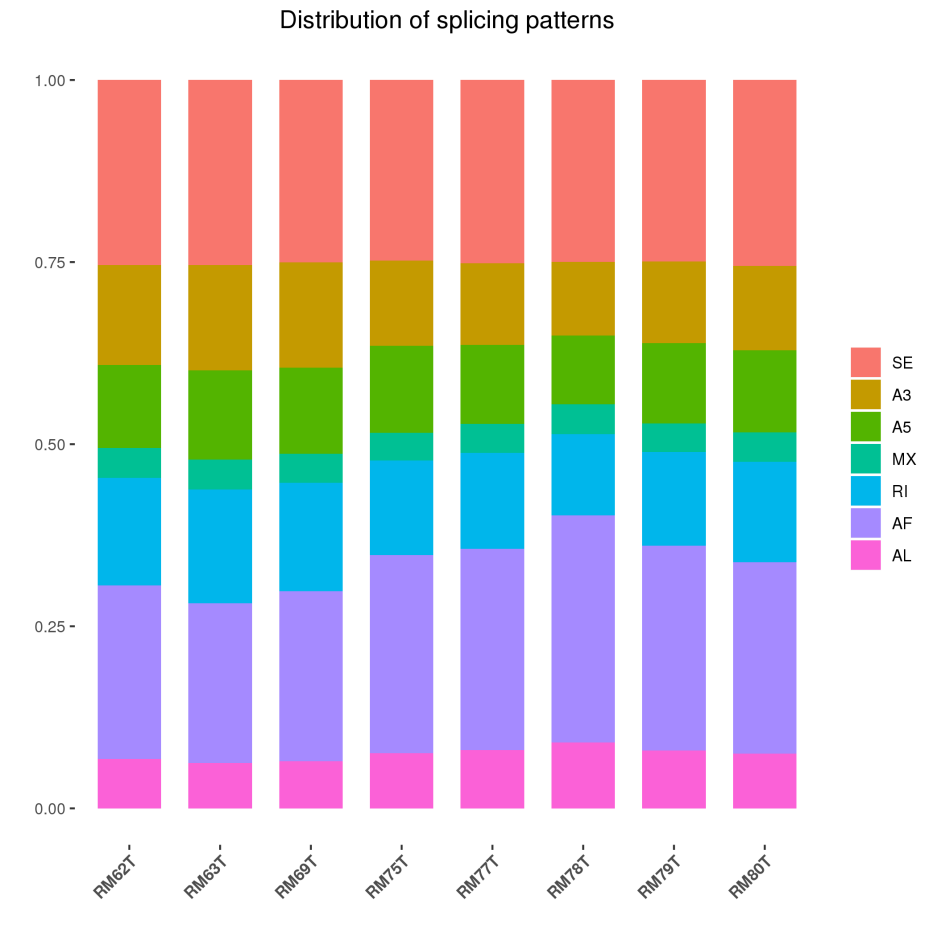 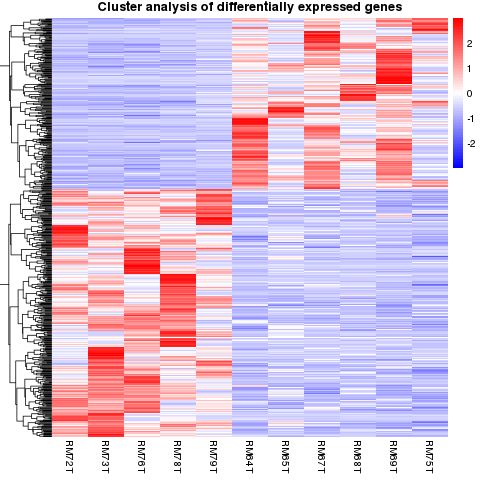 Because Nanopore transcriptome sequencing can be quantified at the transcript level, it can further analyze the differential expression of transcripts under different conditions (Differential Transcript Expression).

[i] GeneA was differentially expressed in condition1 and condition2, but GeneB was not;

[iii] The expression of GeneA and GeneB did not change under the two conditions, but the expression of transcripts A1, A2 and B1, B2 changed significantly. This belongs to DTU.

1 What are the advantages of ONT PCR cDNA over PacBio iso-Seq?

2 Does ONT PCR cDNA need to be repeated?

According to research needs, the focus is on variable shearing of transcripts. Biological repetitions are not required. If you are concerned about the results of quantitative analysis, you must do repetitions. At least three are recommended.

SF3B1 is the coding gene of the key factor of RNA splicing body. Mutations in this gene will affect the normal splicing of RNA and cause abnormal expression of downstream genes. Studies have shown that SF3B1 has a higher frequency of mutations in a variety of tumor cells, of which chronic lymphocytic leukemia (CLL) patients are the most prominent. Although the alternative splicing pattern induced by the SF3B1 mutation has been previously analyzed by RNA-Seq, the short read length limits the systematic identification of this pattern at the isoform level. In addition, intron retentions (IR) are very common in various cancers and can distinguish tumors from matched normal tissues. Short-read technology can easily cause misclassification of intron retention events, especially in complex alternative splicing regions, and transcripts containing intron retention cannot be quantitatively analyzed. 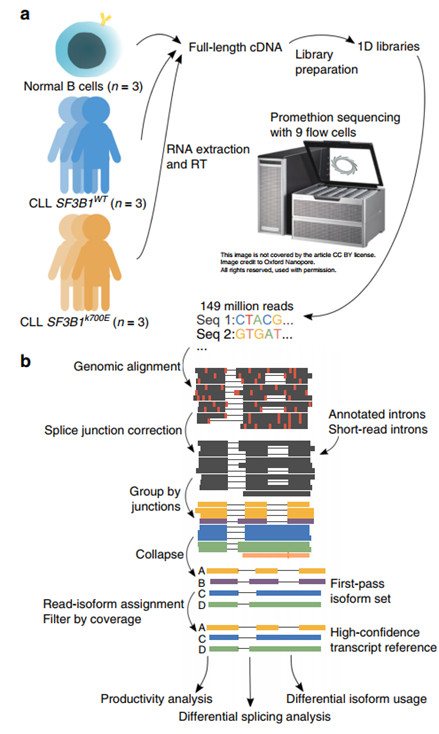 The researchers selected 3 SF3B1 mutation-free CLL patient samples (CLL SF3B1WT), 3 SF3B1K700E mutation CLL patient samples (CLL SF3B1K700E), and 3 ordinary B lymphocyte samples for ONT full-length transcriptome sequencing, obtaining a total of about 257M reads. (Figure 1a). Subsequently, the researchers developed the FLAIR process for identifying high-confidence transcripts. The process includes three main steps: comparison, correction, and integration. Firstly, one must compare the original reads of all samples with the genome to identify the general transcript structure, then use short read sequencing data to correct the mistaken splice junctions in the reads due to sequencing errors, base deletions, and alignment difficulties. Reads with the same splice junction sequence are integrated into the corresponding isoform group, and all the reads are re-aligned to these isoforms. Finally the isoforms supported by less than three reads are filtered out, and the remaining isoforms with sufficient coverage constitute the final high confidence isoform set (Figure 1b).

Using FLAIR, the researchers identified 326,699 high-confidence splicing isoforms, most of which (90.0%) were unannotated isoforms. Of these unannotated isoforms, 142,971 are new combinations formed by annotated splice junctions, and the rest are isoforms with intron retention (21,700) or new exons (3,594). The researchers used the nanopore data to verify the differential changes in the 3’splice site reported by previous researchers related to the SF3B1 mutation. The results show that long reads not only enable the identification of the altered splice sites of mutant SF3B1, but also associate these splice site abnormal events and other similar events with the corresponding full-length isoform. 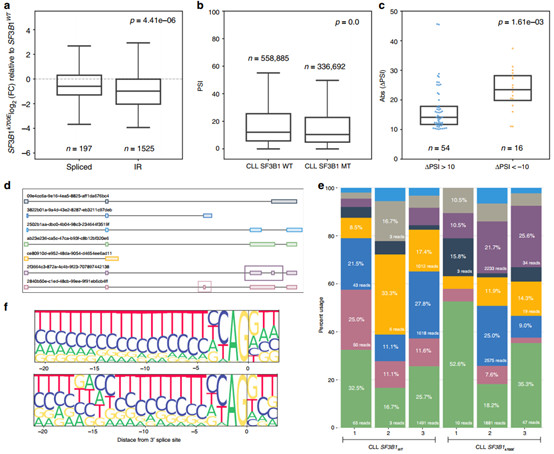 Subsequently, the researchers explored the changes in intron retention isoform associated with SF3B1 mutations. By comparing the expression profile differences between CLL samples, they found that the expression of intron retention isoform in SF3B1K700E samples was generally down-regulated compared with SF3B1WT samples (Figure 2a). Further research found that the use of re-analysis of mutant SF3B1 CLL, Nalm-6 cell line and TCGA BRCA short-read data set confirmed this down-regulation (Figure 2d-e). 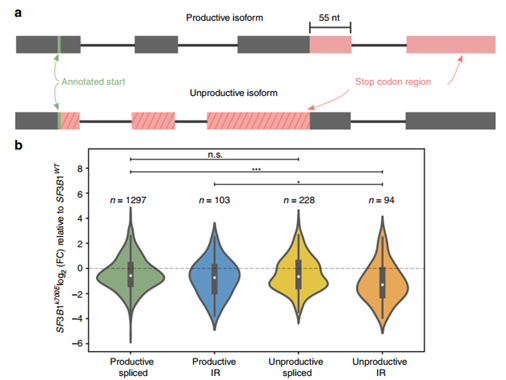 In addition, the study also found that full-length reads can not only improve the recognition of intron-reserved transcripts, but can also better estimate the abundance of valid and invalid isoforms (Figure 3a). The researchers classified the differentially expressed isoforms between the SF3B1K700E and SF3B1WT samples according to whether they were effective and whether they contained intron retention. The results showed that the expression of invalid and intron retention transcripts was down-regulated (Figure 3b). GO analysis found these invalid and intron-retained transcripts are related to the kinase signaling pathway. Researchers speculate that they may be introns trapped in the nucleus, and downregulation of expression may lead to the expression of kinase-related genes, thereby supporting tumor proliferation, but further experimental verification is still needed.